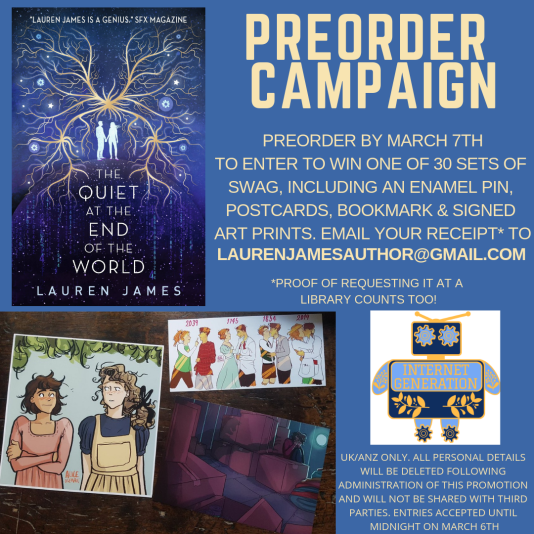 If you pre-order my new book (thank you!) you can enter to win a set of swag including a lil robot pin,  postcards, a bookmark & some art prints. You have until March 7th to email your entry to laurenjamesauthor@gmail.com.

A few other things: Barnes & Noble have named The Loneliest Girl in the Universe one of their top 15 YA books of 2018! I was NOT expecting this book to make it to any of the end of year round ups, so I’m a little blown away right now.

It has also made it to the semi-finals of the *book shimmy* awards! You can vote for it at http://bookshimmyawards.com  if you wish! Thank you to everyone who has voted so far.

I spoke to some bloggers about The Quiet last week, which was so FUN.

Lauren says she was inspired to write this by real science, including those of the dinosaurs or the Dodo, or the ancient creatures of the Cambrian Explosion, 541mill years ago, as well as this Carlo Rovelli quote #WalkerYA2019 pic.twitter.com/cJBBgfKu5c