That’s right: The Loneliest Girl in the Universe is being published in America by HarperCollins.

HarperCollins. That’s the stuff that dreams are made of.

It’s going to be out in July 2018 in hardback, eBook and audiobook (my first English-language audiobook!).

This deal happened in May last year, so I’ve been keeping it a secret for 16 months (the publishing industry is slow, slow, slow.) I’ve nearly exploded with the excitement of it several times, especially when I want to shout about my wonderful US editor, Emilia Rhodes, and I’ve not been able to!

However, the long wait does mean that we’re quite far along in the publication process. I’ve already seen the cover, and it is very different from the UK cover – in the best way. It’s minimalist and art deco and so beautiful I want it as a poster. I asked for a cover similar to the cover for We Are Okay, and they definitely came through. I can’t wait to share it with you all.

Plus, this means that Alice Oseman and I have the same publisher! If you’ve seen the covers for her Harperteen titles, you know that I am in very good hands indeed.

Basically this whole thing is my longest yeah boy ever.

The US edition is already up for preorder:  Amazon US

| Barnes & Noble. If you can’t wait until July 2018, you can get the UK edition from next week internationally with free shipping from Book Depository.

If you’re a blogger, you can sign up to be notified when the US edition of The Loneliest Girl in the Universe is published and ARC copies are available for request.

The full first chapter of The Loneliest Girl in the Universe is also up on Wattpad.

In other news: I had the most wonderful time at Edinburgh Book Festival this week. I spoke with Philip Reeve and Joy Court in front of 500+ students! Total career highlight, I feel like I’m dreaming. Thank you to everyone who came! 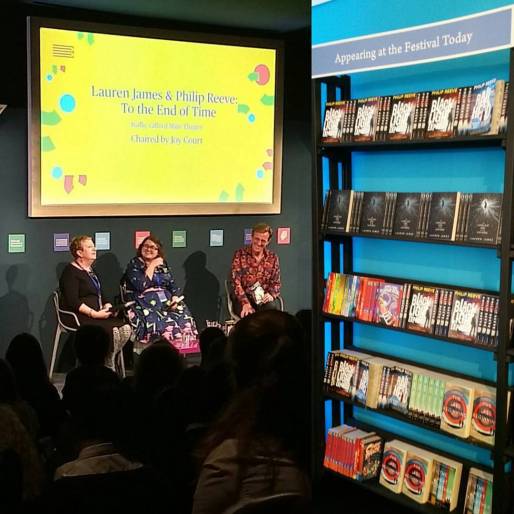 I came home to the wonderful news that The Loneliest Girl is already on its second printing – and it’s not even published yet.

This happens when bookshops/trade/book clubs etc order more copies than are available from the first print run. They order a number of copies based on how many they think they can sell, because otherwise they have to return them. It’s an incredible sign of their trust in this book that they’ve ordered so many that it outnumbers what even my publisher anticipated.

This is a great sign of the future booksellers see for this book and I’m very excited to see what happens next. If you want to make sure you get a first edition, you should probably preorder now though!

It’s now only one week until The Loneliest Girl in the Universe releases in the UK and Australia. I’m holding a giveaway over on Instagram here.

I also did a Q&A with the bookish Kirra.