Blurb: For everyone and everything there is a time to die.

Lirael is no longer a shy Second Assistant Librarian. She is the Abhorsen-in-Waiting, with Dead creatures to battle and Free Magic entities to bind. She’s also a Remembrancer, wielder of the Dark Mirror. Lirael lost one of her hands in the binding of Orannis, but now she has a new hand, one of gilded steel and Charter Magic.

When Lirael finds Nicholas Sayre lying unconscious after being attacked by a hideous Free Magic creature, she uses her powers to save him. But Nicholas is deeply tainted with Free Magic. Fearing it will escape the Charter mark that seals it within his flesh and bones, Lirael seeks help for Nick at her childhood home, the Clayr’s Glacier.

But even as Lirael and Nick return to the Clayr, a young woman from the distant North braves the elements and many enemies in a desperate attempt to deliver a message to Lirael from her long-dead mother, Arielle. Ferin brings a dire warning about the Witch With No Face. But who is the Witch, and what is she planning?

Once more a great danger threatens the Old Kingdom, and it must be forestalled not only in the living world but also in the cold, remorseless river of Death.

Review: So, I recently listed Lirael, the main character of Goldenhand, as my ultimate Book Girlfriend. Here’s what I said about her:

“If there’s anyone who’s a direct inspiration for Clove, it’s Lirael. She lives in a huge underground library and is too shy to even talk to the other librarians. Instead she spends her time exploring its thousand year old depths with her magic dog sidekick. She also can transform into a otter.

It’s hard to articulate how much Lirael meant to me as a teenager. It feels very weird to make jokes about what a babe she is, because I just think that she’s absolutely wonderful. I used to really wish she was a real person. She may be my literary soulmate. I’m so excited to see where Garth Nix takes her in Goldenhand, out next month. I’ve missed her.”

Because of that blog post, Hot Key were lovely enough to send me a limited edition gold signed copy of Goldenhand. It made my month. It’s glorious. 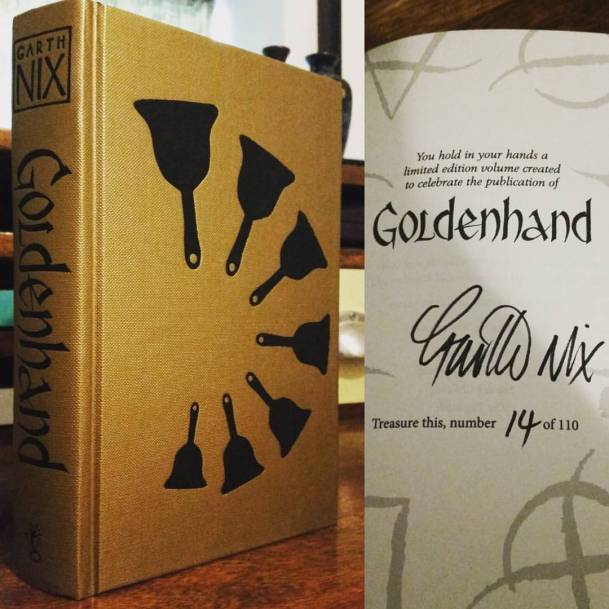 So, obviously the series means a lot to me. I’ve been waiting, like, a decade for this book. (When I first read the series, I remember having to look up the word ‘disreputable’, because I thought it meant that the Disreputable Dog was really smelly. I was tiny.)

Goldenhand didn’t let me down. It ties up all the plots that were left hanging, gives satisfying cameos of old favourites (sometimes too brief, in the case of Mogget, the Disreputable Dog and Touchstone), and casts a whole new dimension onto the existing books.

Lirael was as wonderful as ever, and the new character Ferin lived up to the impossibly high standard Lirael had set. She’s a very Katherine Rundell-esque feral wild girl, and I feel like I’ve not spent enough time with her yet.

I loved seeing Lirael training as Sabriel’s Abhorsen in waiting. Their relationship is so great, and I could have easily read 200 more pages of their interactions. I want spin offs of their day to day life, without the intensity of having a Big Disaster to distract them. In fact, I want a Parks & Rec spin off of the whole family – Sam and Ellimere and Touchstone and Nick and Mogget and the Disreputable Dog, all getting in and out of hijinks.

The story itself focuses on the surviving Big Bad of the trilogy, Chlorr of the Mask – also known as Clariel, the focus of Nix’s last book. Nix never covers old ground, and is constantly expanding his world in new directions – literally going off the map, in this case. That’s why these books feel so real. You can tell there are layers and layers of world-building behind what’s seen on the page (an offhand reference to what created a kind of alternate universe/nuclear wasteland left me absolutely desperate to know more, and I’m sure if asked Nix would have all the answers. Here’s hoping he writes another book about it.)

I was expecting a similar kind of battle to the one in Abhorsen, but in fact the climax of the book is quiet and unsettling and genuinely unique – I’ve never read anything like it.

The romance of the book was the only part which disappointed me a bit. I was bracing myself for this going in, as I’ve changed so much as a person since I first read the trilogy that I knew that whatever happened, it wouldn’t be what I had made up in my head when I was young.

For me, the romance was entirely unnecessary. I would have much preferred to see Lirael as a strong, independent, single woman. Her chemistry with Nick felt forced and painful and unneeded. It seemed to take away from both characters, rather than building them up.

Overall though, this was an amazing end (or continuation? I want more please, Garth!) to one of my all time favourite series. I am so, so happy with it – and I wish I could send it back in time to the Lauren who was aching for it as a teenager.