This week The Next Together is free on iTunes as their Book of the Week. It’s also free on Kobo and Amazon Kindle. (UK only, I believe, but maybe Australia too? I’m not sure.)

Some more things that have happened this week: I did an interview with Jasmine at Wenlock books.

“The storylines of The Next Together and The Last Beginning are completely intertwined. Did you write both books together or did you write one first and then cross reference?
I actually didn’t know there was going to be a sequel until I finished writing The Next Together. When I got to the end I realised that there was this whole other story to be told, from the other side of things. I then wrote the first draft of The Last Beginning, and luckily it coincided quite well because I was working on the edits for TNT.

I was able to go back in and seed in lots of scenes and conversations and plot developments that I’d come up with while writing TLB. It was lots of fun, writing offhand mentions of certain characters in TNT, knowing that readers would glide over them without paying attention – and then the minute they read TLB, they’d be like “OH MY GOD. I’ve known them since the last book!””

Alice did several more excellent drawings of Clove and Ella that have literally destroyed me. 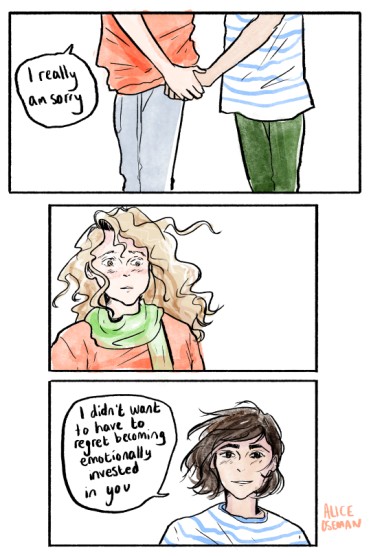 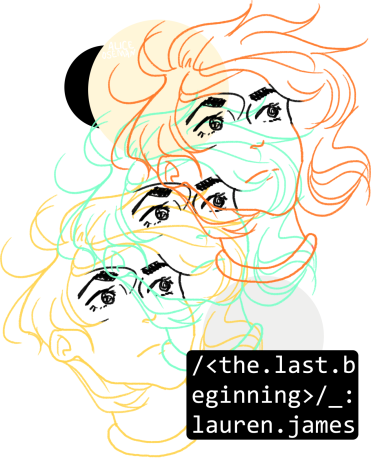 Eek! I think some more AU short stories are in order…

If you missed any of my countdown extras last week, here’s a list:

Some of my favourite reader reactions so far:

“First of all, let my start by saying that this book is so CLEVER. Honestly, the way it ties in with the first book is brilliant and well thought out. I had to grab my copy of The Next Together from my shelf and go back to certain parts now that I understood it more. There were so many ‘OOOOHHHHH’ moments and I need to praise Lauren James for her wonderful brain.” – Queen of Teen Fiction

“Unique, funny, chaotic and full of adventure, The Last Beginning picks up with a new heroine. A passionate knitter and whiz-kid programmer, Clove is smart, impetuous, hot-headed and prone to making slightly disastrous and immature decisions, but her heart’s (usually) in the right place.” – The Paper Alchemist

I did a panel this weekend with Alice Oseman and Caighlan Smith about being young authors at the YLG conference. It was lots of fun – and our outfits were coordinated excellently.

Finally, keep an eye out on Maximum Pop on Thursday lunchtime for some exciting news….!