Yesterday, I wrote a Disney crossover of my new book.

Clove was walking through the market square one day, running errands for her master, the evil Lord of Tring (who not only paid her minimum wage but also made her fetch all the groceries and sleep with only one eiderdown pillow).

“Do you think I’ll have time to visit Miss Perriwinkle?” she asked Spart, her pony, who trailed along behind her with bags of flour strapped to his back.

You can read the rest here.

Today I’m making this second picture by Alice into another AU. (By the way, there’s also some art drawn by Alice in the book. I’m not going to post a pic because it’s a spoiler, but it’s on page 267.) 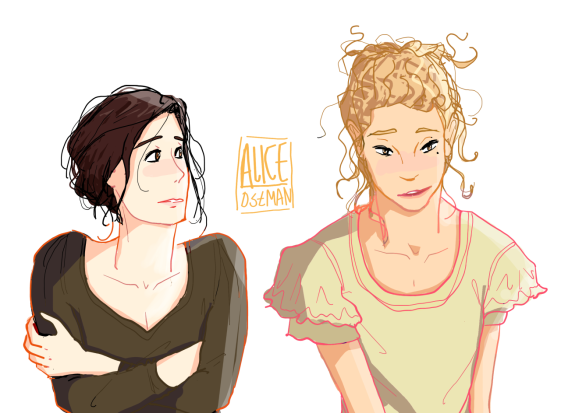 Okay, so this one is a looot more serious. They both look so sad. This is straight out of some indie film, or a really intense fanfiction. Clove looks like she’s just realising that the fact dating thing isn’t working because she’s accidentally fallen in love with Ella. The style really reminds me of Lost in Translation too.

Oh! Wait! It’s a Titanic AU. They’ve just found out the ship is sinking! And for maximum angst, it’s clearly POST BREAK UP too. Let’s get those tears flowing.

Clove had known that Elenore was also travelling on board the Titanic. She’d known for over a year, ever since their parents had bragged together about having secured tickets on its maiden voyage. That didn’t make the sight of her any less painful. She was following her mother up the gangway, parasol over one shoulder and skirts lifted to avoid the puddles. Their servants trailed behind, dragging a trolley of leather suitcases.

When Elenore caught sight of Clove, standing on the docks with the breath knocked out of her in surprise, she stopped in her tracks.

Elenore’s eyes ran across her face. She opened her mouth to speak. Then her mother turned and said, “Come along, Ella.”

She blinked once, twice, and then turned away from Clove, her jaw tight. When she followed her mother onto the Titanic, Elenore didn’t look back at Clove even once.

It had been over a month since they had broken up, and it still felt like Clove’s heart had been torn out of her chest every time she thought of her. Every time she remembered how things had been once, when they’d been in love and Clove had been happier than she’d ever thought possible. But she had to try to move on, just like Elenore had. Their families were emigrating to completely different states in the New World. After the voyage, they would probably never see each other again. Their relationship wasn’t meant to be.

That didn’t stop Clove wanting to spend the rest of her life with Elenore, curled up in front of the fire reading in a peaceful silence (Clove studying the work of Ada Lovelace, while Elenore translated Latin texts), or riding across open countryside side by side, or engaged in any of the other pursuits they had enjoyed for most of their childhood.

She wondered if Elenore had any regret at all for the way they’d left things.

Clove ducked her head, rubbing the back of her neck, and vowed to put all thoughts of Elenore out of her mind.

Only one week, she told herself, as she followed her parents on board the Titanic. Only one week on this ship, and she’d never have to see Elenore again. And it was the largest ship in the world, after all. What were the chances they’d bump into one another?

The next time she saw Elenore, four days later, she was standing at the bow of the ship. The first thought that crossed Clove’s mind was: she’s wearing the scarf I knitted for her. The second thought was: I am totally, and utterly lost.

It was past eleven at night, but Clove had been desperate for some fresh air. It seemed Elenore had had the same thought. She was framed by stars and the boiling waves of the sea below, her curls glowed golden in the moonlight, and her cream dress swept across deck in an elegant curve. She was absolutely wonderfully stunning. And Clove was still as in love with her as ever.

Clove took a step backwards, trying to slip away before Elenore saw her, but she knocked a life jacket off its hook. It looked to Clove like it fell in slow motion.

When it crashed to the floor, Elenore span around.

“Clove,” she said, the words an exhale.

“Ella.” Clove nodded tightly at her, and paused, unsure whether she should leave. There was something that looked a lot like longing in Ella’s eyes. “I hope your parents are well?” she asked finally.

“Very well.” Elenore looked at the ground.“Alfie is very much enjoying the voyage so far,” she added.

“I miss him,” Clove said. Alfred was her younger brother. They had played croquet with him all summer, before things had been broken forever.

Elenore stopped speaking as abruptly, the floor beneath their feet seemed to shudder. An earthquake, Clove thought lightning-fast, before remembering they were on a ship.

“What was that?” Elenore said. She leant over the handrail, looking down at the sea far below them. “Oh! Clove, look!”

Clove walked to her side and peered overboard, breathing deeply to try and still her heartbeat. She wasn’t sure if it was racing because of surprise, or because of Elenore’s arm touching hers.

It was enormous, white and blue with frost. It was rapidly disappearing in the wake of the Titanic, but smaller shards of ice surrounding it made it clear what had happened: there had been a collision. The Titanic had hit an iceberg.

“Do you think it caused any damage?” Clove asked, worried suddenly. Everyone made a huge fuss about how robust the Titanic was, saying that it was like no ship that had come before it, but the iceberg was enormous. It had been large enough for the ship to shudder noticeably when they had collided.

Elenore bit her lip, frowning. “I hope not.”

Clove shivered, suddenly aware of the ice cold air around them. Just the thought of the sea below them was enough to make her freeze. “Let’s go inside,” she said. “I’m sure it was nothing.”

Two hours later, Elenore and Clove clung to each other in the ocean, gasping for breath. Clove fought to think above the ice cold sting of the water. It felt like daggers, digging into every inch of her body.

Elenore sobbed. “It won’t be long. The lifeboats will pick us up soon, I promise.”

Clove didn’t want to say that she thought the boats probably weren’t going to come back for them. The crew had been too scared to risk their boats being overturned.

“I love you,” she said instead, wiping strands of hair away from Elenore’s face – strands which were already turning to ice. “I wish we’d never decided to end things. It wasted the last time we had together.”

Elenore kissed her, cupping her face calmly. Below them, their legs kicked violently to keep them afloat. Clove kissed her back, even though her lips were so numb that she could barely feel the touch.

When they parted, Elenore was crying. “I’m going to love you for the rest of my life, Clove Sutcliffe,” she said. Her voice was determined. “And I’m not letting that end just yet.”

Elenore wrapped her arm around Clove’s waist, tugging her with her as she swam towards the lifeboats, distant lights in the pitch blackness.

“We won’t make it,” Clove gasped, kicking her legs as much as she could. She felt dizzy with weakness, and so cold that her heart was slowing. “It’s too far.”

“We don’t have to,” Elenore said, and grabbed onto a piece of wood floating in the water, one of the last remnants of the Titanic. She pushed Clove onto the debris, and climbed on after her.

“Big enough for both of us,” she said, gasping. She was trembling.

Clove pulled her closer, wrapping her arms around her. She pressed her lips to her ear.

Every year for the rest of their lives, on the anniversary of the sinking of the Titanic, Clove and Elenore would remember. Quiet and sombre, they would spend the day on the beach at the end of their garden, staring out at the deceptive calm of the ocean. Then they would return to their family and try not to think, for another year, of all the ways they’d nearly lost each other.

7 thoughts on “Countdown to The Last Beginning: 3 days to go! – TITANIC CROSSOVER”