Lots of you have already read my short story Another Together and said how much you enjoyed it. Thank you so much! If you want to read it, it’s free on amazon here. On the day it was released, it got to #200 in the Amazon rankings! Wow guys!

In case you missed it, last week I wrote a blog post about why I decided it was worth releasing a free eBook. It gets into the finances of being an author, so it was very scary to post, but I think there should be more honesty about money in the publishing community.

Today I’m talking about the process of researching the story. As I was writing the story in a gap between other projects, I didn’t have much time, so for a week I dived straight in and immersed myself in everything Bletchley. Here’s what I got up to.

When I was announcing Another Together, I posted a lot of pictures of Bletchley Park. Those were taken during a research trip I took to the park in February, the week before I started writing the story. It’s an hour’s train ride from where I live, and it was a really fun day out.

One of my favourite things about Bletchley were the signs. On every wall were signs warning the workers to keep everything a secret (like they could forget?!) in the form of the classic KEEP CALM AND CARRY ON sign. They were really cool! 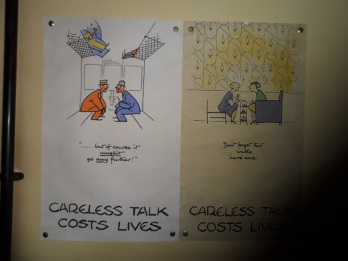 The desks of the workers were also very interesting. They’d spent a lot of time gathering authentic artefacts, so they felt as if they’d been abandoned after World War II and left there ever since. 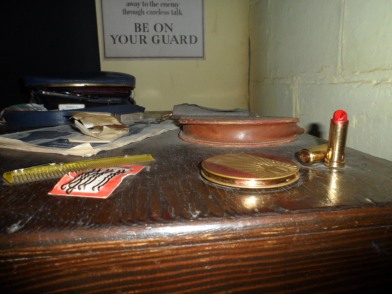 And here’s a room in Bletchley town where the codebreakers like Kitty and Matthew stayed. 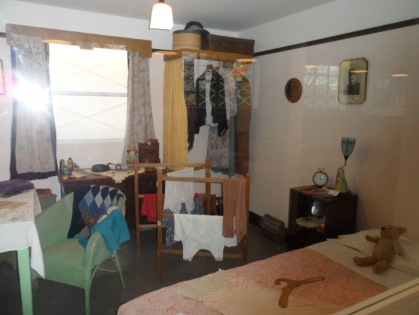 It really brought everything to life for me, so I could get into the heads of Kitty and Matthew and what life at Bletchley would have been like for them.

The visit was also a nice source of inspiration, as it showed me things I’d never thought about before. For example, in the story, Kitty and Matthew are ice skating on the lake when they discover a corpse.

Kitty crouched down, staring at the ice. All of the colour had drained from her face, which had been a lovely wind-chafed pink.

“You need a hand?” Matthew carefully skated back to her. “Have you got yourself stuck?”

“No, Matthew. There appears to be a hand. Frozen in the ice.”

That was inspired by this picture, on a display by the lake. 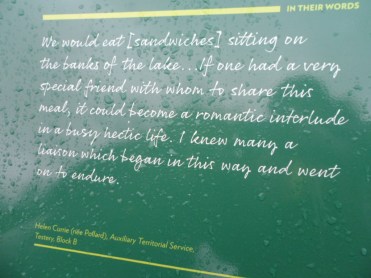 There are only a few films set at Bletchley, but I watched THE IMITATION GAME with Benedict Cumberbatch and Kiera Knightley. Whilst I’d heard that some of the representation is slightly problematic, especially in terms of Alan Turing’s story, I thought it was worth watching to get a better picture in my head of the place and clothes. It was filmed at Bletchley, so I think that helped.

I also watched the first episode of the TV series THE BLETCHLEY CIRCLE – but it mainly takes place after the women have finished working at Bletchley, so that wasn’t much help!

I read a few non-fiction books by Sinclair McKay, which were also really useful.

When writing The Next Together, the most useful thing by far was the primary sources I found from 1745 and 1854. They really helped me get an idea of real life in those times, and there’s always fun anecodes which I like using.

I read a lot of interviews with people who worked at Bletchley. The best thing I heard during my research was that even after WWII ended, everything that had happened at Bletchley was still a secret. It was classified in case there was another war, so the British would still have access to codebreaking information that other countries didn’t know they had. When it was finally declassified in the seventies, apparently married couples would find out that both of them had worked at Bletchley – and had kept the secret so well afterwards that they hadn’t told their spouse of 30+ years! That kind of dedication to secrecy for King and country is incredible.

Annoyingly, I found out after the story was released that my old form tutor’s mother actually worked at Bletchley Park – and my teacher spent the first 6 years of her life living there! It was a bit too late to ask her to proofread the story for accuracy for me, so I was cursing myself. I’m sure she would have been able to give me some wonderful stories to add!

And that’s it! As always, I underestimated how much work is involved in writing a piece of historical fiction. It’s about 60% research and 40% actual writing! But it’s always, always worth the effect.

This week I’ve been reblogging lots of pictures about Bletchley, so head over to my tumblr to see more, in the tag here.

In other news: On Wednesday I’m going to be part of an amazing panel at Waterstones Birmingham.

The schedule for YALC 2016 has been released, and I’m going to be running a workshop with Alice Oseman at 1pm on Saturday 30th July called ‘Creator vs. Fandom: Authors on Social Media’. We got to choose the topic, and I hope we’ve come up with something that we’ll all really be able to sink our teeth into. Alice wrote the perfect summary, so I’m just going to steal hers: “We’ll be talking about how authors and readers behave online, how to avoid internet drama, how to be empathetic and supportive and kind online, and we’ll definitely be discussing some of the most infamous examples of author/reader clashes…. all that sweet tea.”

The Next Together is also going to be the June read for two different book clubs: the YA Shot Book Club (you can join LaChouett and the group here on Goodreads) and the #readUKYA Book Club run by Lucy Powrie, for its inaugural month, alongside THE GIRL OF INK AND STARS. I’m so overjoyed by this, and I’ve already bought my copy of INK AND STARS. Whoo!

To finish, some shameless friend plugs – a month ago I had a ridiculous dream where my mate Sarah wrote a blog post comparing Hamilton songs to YA books (because we have joint custody of an obsession with Hamilton) (and I like telling her what to blog about so I don’t have to). And SHE ONLY WENT AND DID IT! What a hero. Sarah, your next mission: the Hannibal/Hamilton crossover the world needs. (Also, related: I finished my copyedits yesterday and did a Hamilton singalong in celebration. #noregrets)

Cover and title for Book Three. Now, I don't like to play favourites, but this one is 100% my favourite. pic.twitter.com/Pe4GmgXLlv