Happy May! I’ve been an outrageous blogger and only posted once since my last monthly round up. In apology, here is an extra long April faves for you. Enjoy.

Mode of transportation: My first car (!!)

Far and away my favourite of this month was my most expensive purchase ever – I bought my first car! It’s beautiful and shiny and I’m in looooove.

I have become unbelievably obsessed with this series, so fast. It just sucked me in from the beginning. It has the kind of affectionate teasing of its characters which I love, and with every episode the plot gets more and more cheesy and intense and complicated. Basically, this is the tv epitomy of the word outrageous. In the first series finale, I was in absolute buckets of tears, which I totally didn’t expect. I got so attached to everyone.

The first series is on Netflix. Run, don’t walk.

This was one of my most anticipated reads of 2016, and it completely lived up to expectations. I did have a few issues with it, which I am very interested in discussing with my RCBC (Raven Cycle Book Club).

But overall, it was a very satisfying and emotional end to the series and I just love them all, okay? Gansey remains now and forever my ultimate fave, but I think Adam has started to give him a run for his money.

Our Raven Cycle group chat has descended into discussing a car I'm bidding on……truly @mstiefvater would be proud pic.twitter.com/j0smf5mv0h

A shout out should also go to libraries in general. Now I can drive (!) I’ve joined three local libraries and got so many books. Like, for free?!!? It’s amazing!

As it’s getting warmer I’ve been perfecting the art of making iced tea, English style. My current favourite version is this:

Tumblr had been developing a horror story around this short advert/story featuring Gwenyth Paltrow. It rivals genuine spooky films for creepiness, and I’m so into it. First read this and then have a look through this tag to see how d e e p this gets. Amazing. I want a film/book/tv series about Alice.

Forum: bodybuilding dot com thread where two guys argue about how many days are in a week

In a similar internet-weirdness vein, I recently came across this forum thread again. I first read it a few years ago, and I think about it probably more frequently than I should.

Blog: Jim’s Recent Links Round up

I’ve been loving Jim at YAYeahYeah’s round-up posts – and not only because he adds my stuff! It’s a great catch up on the UKYA world, especially if you’re like me, and terrible at keeping up with Twitter. Everything he recommends is interesting and well written and I usually end up with so many tabs open that my computer crashes.

I’m so into this semi-real, semi-dystopian satire story about Disney/Marvel’s world domination.

Someone write the full novel of this, before I do.

In Other News: There is a giveaway to win a query + first chapter critique by me, running here, along with lots of other authors and editors!

I’ve become an admin for the UKYA blog group Author Allsorts. I’ll be doing general management things and coming up with blog ideas alongside Emma Pass and Kerry Drewery, now that the lovely Kate Ormand is sadly stepping down. I’m very excited to be part of such a lovely team!

It’s been announced that I’m appearing at YALC this year on the Saturday. I’m also joining the My Kinda Book tour in June! 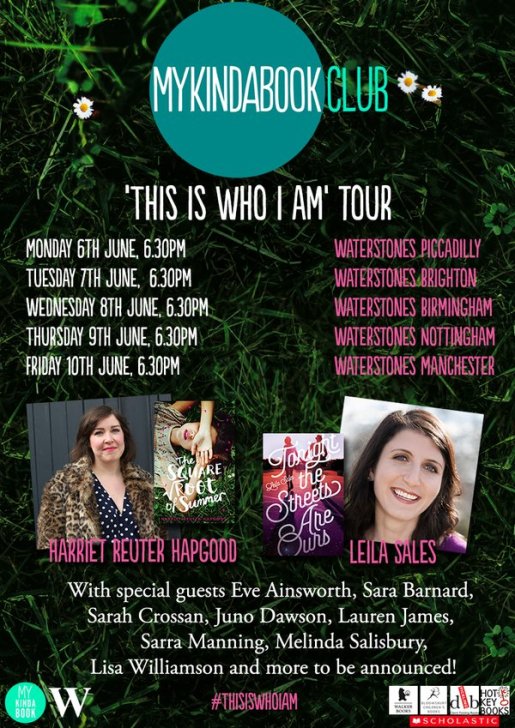 The ticket office for YA shot, which I am also appearing at, is now open here!

This month I got to do a panel with Alice Oseman, which was amazing – it was definitely the best event I’ve ever done. #laurenandalicetourplease 😉

@Lauren_E_James is a cinnamon roll reading the prologue of TLB with @AliceOseman being the supportive friend #goals pic.twitter.com/SHyde8ddMO

Brum Radio Book Show discussed TNT this week, and were very lovely about it. You can listen here, from 44 mins onwards. I also got very excited about this Guardian site review. Thank you, guys!!

I hit the halfway point in writing my fourth book this week too – hurray! I always get convinced I’ve forgotten how to finish a story about 20k words in, so I’m relieved to have remembered how it all works. It’s (hopefully) all easy going from here.

I’m so into it and it’s so intense and the characters are really being stretched more than any I’ve written before and I’M VERY HAPPY. I went through a couple of weeks where I couldn’t write at all because of stress/anxiety but I’ve got over it finally. Now I’m racing through it!! And I wish I could tell you what its abouuuuuut! (I posted a book playlist here)

I know this is an #unrelatable post but BE HAPPY FOR ME, OKAY?