A lot like this, mainly. With probably more eye rolling. 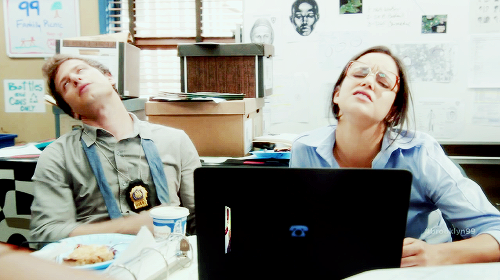 I don’t have a routine, but I’m very picky about my working environment. The slightest excuse not to write and I won’t get anything done! I need chewing gum, a spreadsheet of my daily word counts on myWriteClub (to keep me accountable!) and lots and lots of music. I’m currently obsessed with Halsey’s album Badlands.

As for my writing process, usually I start out with an idea from a dream, or something I wake up thinking about. I’ll make a note on my phone like: reincarnation fic? and over the next few weeks I’ll be working out how it could play out in my head. I won’t write anything down for months probably, and I always start with plot, not characters.

When I decide to start writing it, I’ll type out everything I can think of about my idea and try and form it into a synopsis, like: There’s a girl who meets a boy in her first year biology lab and she knows his name and what his voice sounds like. Then I’ll probably leave it a while again, a few weeks or days.

Then I start reluctantly doing character development (I am terrible at this) (no really). I have now on four occasions got to the point where a new character appears and had to stop writing to decide what they are like, because I’d been putting it off for so long. It usually takes me two drafts to really understand my characters; until then I’m just kind of bemused by them. Once it clicks I can tell you everything and anything about them and love them like children.

Right now I’m writing a character and I’ve written 25k and all I really know about him is that he’s a softbro. We’ll get there eventually. The way I tackle my character development fear is usually via tumblr? Like I have very detailed book tags with all my character insp pictures: book one; book two; book three; book four; book five. I don’t know if that is useful to know or not. I just see a lot of stuff on my dash that reminds me of my stories. I know a lot of authors use pinterest for this.

I write chronologically and don’t let myself skip ahead, though I usually find myself waking up to write down lines and dialogue I want to add later.

I spend a lot of time messing around with formatting. I can’t just go into a word doc and write. It has to be Sitka text size 12, and I need page numbers and a title page and headers because ….I’m a good procrastinator.

I usually I have at least one epigram before I write a word (I collect too many epigrams. I have to cull them frequently.) It used to be single spaced but usually you submit in double spaced, and I’m used to it now. I find single too crowded.

My document usually starts as a plan, but this tends to be pretty aggressive and sarcastic and I don’t really follow it. I usually focus on the short term- I have a list of one-liners or dialogue from notes on my phone I want to include, so I paste that into the word document and write through it. It’s satisfying if I write in all my notes, I’m more pleased to have done that than if I wrote 10,000 words.

I find working from little tidbits like that can really help if I’m stuck with a scene, it’s like fic prompts.

Like: she sullenly refused to meet his gaze, sure he was laughing at her
“what kind of feeble response is that”
use phrase ‘monstrous rage’ hah

I just try and fill in the gaps between those ideas!

I occasionally write out by hand, but I have to type it up pretty much immediately, and I usually waste a long time editing it instead of writing more.

Usually I listen to my book playlists. I can’t really write without music, but it has to be music I know really well. If I’m having a good writing moment I’ll be singing too. At the minute I’m listening to Brave- Sara Bareilles, Young volcanoes- Fall out boy, and High Hopes- The Vamps a lot. It needs to be upbeat because I type to the rhythm of the music.

My writing time is usually from 2pm-1am, but when I go to bed I’ll have an hour where I keep waking up to make notes.

I use a lot of italics and try to actively avoid adverbs. I dislike all caps dialogue. I try and think about what different media types I could use and work them into the story- letters, instant messages etc.

When I’ve finished I’ll share it with a few people and my mum and then put it away from two months before looking at it again.