I’m a huge fan of the feminist humour website The Toast, and my super secret personal goal for 2015 was to write an article for them. I’m happy to say that I managed it! Here is my first ever freelance article, written on the topic of (of course) Harry Potter. I also put my chemistry degree to (debatably) good use and added a bit of science to it.

The Hogwarts Houses of the Periodic Elements: A Critical Analysis

To read the rest, visit The Toast here! There are diagrams.

Over the century since its creation, the Periodic Table of Elements has been studied almost as much, if not more, comprehensively than the Harry Potter universe. It is far past time that the two academic schools of thought were combined.

In the Twentieth Century, a system of organising subjects into a simple order was invented. It quickly caught on, and has since become a worldwide shorthand for summarising complex information.

The system is, of course, the Hogwarts Houses of Gryffindor, Ravenclaw, Hufflepuff and Slytherin. They were created by J. K. Rowling in 1997, when they were originally published as ‘fiction’ in the Harry Potter series. The Houses have since been reclaimed as a social tool.

In transferring over to the real world, the sorting system has become so much more than just fictional boarding school Houses. The Houses are a personality type; a Buzzfeed quiz; a political affiliation; an allegiance stronger than blood; and for some people . . . a way of life.

Almost as famous as the most important invention of our age was the development of the Periodic Table of Elements in 1869 by the chemist Dmitri Mendeleev. The table orders atomic elements into groups based on their characteristics, behaviours and interactions. Similar, some might say, to the Hogwarts Houses.

So, how do the two systems compare? Is it possible to combine them, to create one perfect, hyper-efficient organisational tool? This publication will present a hypothesis for the possible structure of this type of system.

Following careful analysis, here follows a ground-breaking proposal for a possible “Table of Houses”, designed for the use of chemists and Harry Potter fans everywhere.

The groups on the far left of the Periodic Table, like Slytherins, are easily excited. It takes very little to set ‘em off. In particular, they react extremely aggressively with the following:

These are useful occasionally, but in general they are pretty harmful – especially in high doses. They are particularly clique-y, and tend to travel in pairs. Very competitive amongst themselves.

These are very impressive and shiny at first glance, and pretty strong. They generally need some sort of catalyst to force them to change their behaviour. They are reliable and useful in day-to-day life.

These are always . . . around. They know everyone, but they are so laidback they never seem to get in any kind of conflict. They just kind of, you know, hang out. 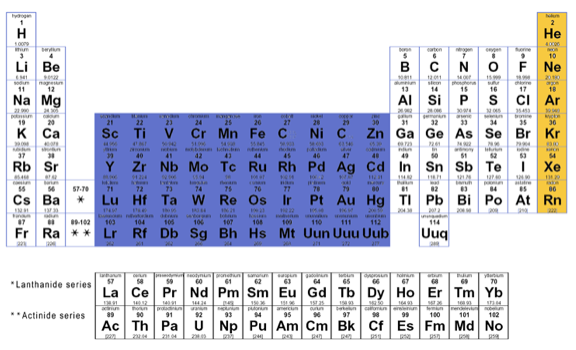 These get involved with everything and everyone. They can be problematic but they are generally needed, and keep everything running smoothly. Works closely with the following:

These are the catalysts that get things going. They are essential for life, and everything would fall apart without them.

These are very mysterious. You hear a lot about them, but they never seem to do much. It’s never really made clear where they came from. They can’t survive in air, generally.

Fig. 3: Dumbledore in purple, McGonagall in green, the Giant Squid in grey

These can bond with some Gryffindors/Halogens (especially those with bushy hair and high intelligence) but may react explosively with others. They all look very similar physically, and while they seem tough, they are surprisingly soft.

These are silvery and beautiful. Very stable, and a lot stronger than they look. They often gather huge numbers of followers. Very adaptable.

It is obvious that the Periodic table divides up easily, logically and completely, absolutely naturally into the fictional universe of the Harry Potter series. This discovery has vast potential in and out of classrooms, perhaps as a Chemistry study aid or as a new form of insult. “Urgh, you’re such an Alkaline Earth Metal!” people might soon say, in the same way they would accuse someone of acting like a Slytherin, or a Giant Squid.

Excuse the lack of modesty, but this may even herald the beginning of a new era and a startlingly original way of thinking. Maybe this day will be recorded for years to come as the beginning of . . . Pop Culture Science.

If there are any comments or corrections to this paper, please submit your comments in the format of an academic peer review, under COPE guidelines.

2 thoughts on “I wrote an article for The Toast!”